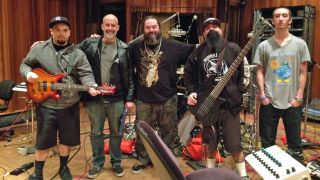 The band – led by Max Cavalera – are working with Slayer, Hatebreed and Sum 41 producer Matt Hyde at his California studio on the new record.

Cavalera’s wife Gloria posted a picture on Facebook of the band with Hyde, along with the caption: “Day one in the studio with Matt Hyde. With Marc Rizzo, Monte Conner, Tony Campos and Zyon Cavalera.”

The album will be the follow-up to 2013’s Savages.