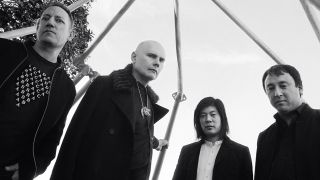 A reunion has been touted for some time, with both vocalist and guitarist Corgan and drummer Chamberlin reporting last year that they were open to the idea. Then, last month, Corgan published a photograph showing the trio in the studio.

As expected, there’s no room for original bassist D’arcy Wretzky on what is billed as the Shiny And Oh So Bright 2018 Tour, with a war of words between her and the Pumpkins’ camp emerging over the course of the last week.

Bass duties will be handed by Jeff Schroeder.

Corgan says: “Some 30 years ago, as The Smashing Pumpkins, James Iha and I began a musical journey in the cramped rear bedroom of my father’s house.

“And so it’s magic to me that we’re able to coalesce once more around the incredible Jimmy Chamberlin, to celebrate those songs we’ve made together.”

Tickets will go on sale from Friday, February 23 via LiveNation. Find a full list of tour dates below.