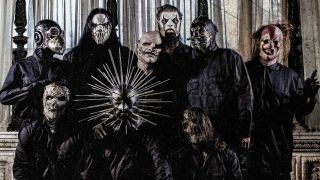 Slipknot in the .5: The Gray Chapter era (Image credit: Slipknot)

Slipknot’s Shawn ‘Clown’ Crahan has shared an alternative cover design that was considered for their fifth album .5: The Gray Chapter.

The follow-up to 2008’s All Hope Is Gone launched in October 2014, with the percussionist and Slipknot co-founder uploading the artwork to mark its fifth anniversary.

Crahan says: “Today marks the 5th anniversary of .5: The Gray Chapter. This cover was a strong contender for the final album artwork and represents where my head was at during the making of this album.”

Check it out below, where you can compare it with the chosen design.

The record was Slipknot’s first without drummer Joey Jordison and late bassist Paul Gray, with Jay Weinberg and Alessandro Venturella taking over respectively.

Last week in an interview with Music Radar, Venturella reflected on what it was like stepping into the band, saying his initial role was to “fill a great man’s shoes and do him justice.” He also revealed that listening to Gray made him look at the bass in a different light.

Slipknot will head back on the road across South America in November and December, before returning to the UK and Europe in early 2020.

The band have lined up the shows in support of their new album We Are Not Your Kind which was released earlier this year.

Today marks the 5th Anniversary of ‘.5: The Gray Chapter.’ This cover was a strong contender for the final album artwork, and represents where my head was at during the making of this album. -clown Slipknot