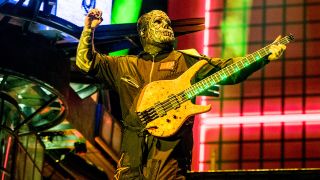 Alessandro ‘V-Man’ Venturella has recalled his audition for Slipknot in 2014.

The Krokodil bassist was brought into the band in 2014 following the death of original member Paul Gray in 2010, and went on to make his debut on Slipknot’s fifth album .5: The Gray Chapter.

In a new interview with Music Radar, Venturella says that his initial role in the band was to “fill a great man’s shoes and do him justice” as he also reveals listening to Gray made him look at the bass in a different light.

Venturella reports that he closely examined Gray’s style to “delve deep into what he did and the tonality of what was happening” when he first joined and adds: “My approach isn’t the same as Paul’s. I can’t be him and never will be, every player is ultimately born different.

“That said, if you listen to Paul’s note choices on Vermilion, he was all over the shop and it sounded great. I wanted to try things like that.”

Venturella adds: “After listening to his stems, I honestly looked at bass in a different light and understood how to support everything as the backbone.”

As for his Slipknot audition, Venturella – who was once Mastodon guitarist Brent Hinds’ tech – explains: “Me and Jim Root became friends while I was teching. He was asking if I knew any bass players.

“When I found out what for, I put my hand up right away. He pointed out, ‘But you don’t play bass?’ and I said something to the effect that I could do whatever he needed from me. Then I just had to make sure it was true!”

Venturella learned twice the number of Slipknot tracks asked of him for the trial and even borrowed Mastodon bassist Troy Sanders’ instrument for the audition.

“Everyone went to chat afterwards so I sat there playing piano, which I’d studied as a kid,” he says. “They must have been wondering, ‘Who the fuck is this guy?’

“Two weeks later, I was hanging out with everyone and Shawn ‘Clown’ Crahan said to me, ‘Right! Are you going to do it?’

“I rang my mum straight away to tell her I wasn’t coming home!”

Venturella and his Slipknot bandmates will head back on the road across South America in November and December, before returning to the UK and Europe in early 2020.

The band have lined up the shows in support of their new album We Are Not Your Kind which was released earlier this year.