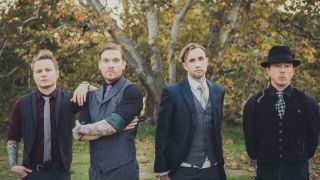 Shinedown singer Brent Smith has revealed the band are recording their fifth album, and its theme is “survival.”

The follow-up to 2012’s Amaryllis is expected by late summer.

Asked if it’s difficult to choose which tracks will make the cut, Smith replies: “Not this time. It’s a devastating album. Beautifully Brutal. We are four weeks into recording. Release by late July, early August.”

To the question “What’s your all-time favourite songs?” the singer responds: “They are being recorded right now.”

Smith also reveals the first single from the project would be launched soon. “We are thinking late April”, he says.

Shinedown currently have two US dates scheduled: the Moondance Jam in Walker, Minnesota, on July 18 and an appearance in Jackson, Mississippi on August 9.