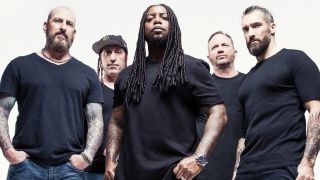 Sevendust drummer Morgan Rose has been hospitalised, meaning the band will no longer join Alter Bridge and Shinedown on their upcoming UK tour.

The live shows will get under way later this week, with Sevendust issuing a statement to explain the situation.

They say: “UK family – it is with a heavy heart we have to say that we will not be able to join our brothers in Alter Bridge and Shinedown on the upcoming UK tour dates on the Walk The Sky tour.

“Morgan is sick, in the hospital and under doctor’s orders not to move or leave the country. We will make it up to you all. See you guys at the acoustic Christmas shows.”

Sevendust have given no further information about Rose’s condition.

The US Christmas shows mentioned in the statement will take place at the Georgia Theatre in Athens on December 28, Orlando’s House Of Blues on December 29 and Fort Lauderdale’s Revolution Live on December 30.

Sevendust will be joined by Deepfall on all three dates.

Speaking previously about the UK tour, Alter Bridge's Mark Tremonti said: "We are honoured to be returning to the UK with our friends in Shinedown and Sevendust this winter.

"See you all very soon, we couldn’t be happier with the lineup and can’t wait to share our new tunes with you!”