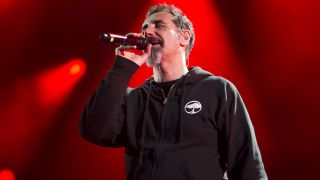 Serj Tankian has gone through his archives and picked out an early track titled Industrialized Overload to thank fans for their support.

The System Of A Down frontman has worked on several film scores over recent years and recently reported that he was “tired” of writing vocals.

Tankian says: “Dear Friends, I want to wish you all a healthy, happy, restful and joyful holiday season. As an artist, I am truly grateful for your continued support.

“As a token of my appreciation, I have hand-picked a track from my early works called Industrialized Overload for free download exclusively to all our email subscribers. This track actually disturbs my own normal brain patterns so consider this a gift and a warning.”

System Of A Down’s last album was 2005’s Hypnotise, with bassist Shavo Odadjian admitting over the summer that he had no idea when a new record would arrive.

His comments came after drummer John Dolmayan said he was disappointed that work on their sixth album had stalled, despite previously reporting that the band had “about 15 songs” in the works.

Serj Tankian: The 10 albums that changed my life