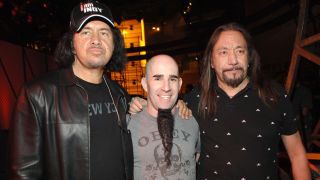 Scott Ian says he doesn’t agree with Kiss fans who continue to call for Ace Frehley and Peter Criss to return.

The Anthrax guitarist and lifelong Kiss fan says he trusts Kiss mainmen Paul Stanley and Gene Simmons to make the right decisions for the band.

Guitarist Frehley was replaced by Tommy Thayer while Eric Singer is in the drum stool formerly occupied by Criss.

And though he thinks Frehley could still cut it with Kiss, he is not so sure Criss still has what it takes.

Ian tells 99 Rock (via Blabbermouth): “As a fan, I would love to see Ace Frehley play one more time in Kiss. And I’m gonna be completely honest, and this is no knock on Peter, but the last time I saw them with Peter, on the Kiss/Aerosmith run, like 13 years ago, the tempos were terrible.

“But it’s not my band. It’s Gene and Paul’s band and those guys know what’s right for their band. They’ve proven it. Stop questioning Gene and Paul.”

Ian points to the fact that Kiss are still a major live draw as proof that Simmons and Stanley know what they’re doing.

He adds: “Look, I’m a lifelong fan of that band. But the bottom line is, and what people need to understand is it’s Gene and Paul’s band. They are the guys that have worked their asses off since 1973 to keep that band, that business moving forward all the way into 2016 and still on the level that they’re doing it.

“You have no idea what it takes to make a band last that long at the level that Kiss is. So it’s their band and it’s their decision.”

Anthrax are currently on tour in North America in support of latest album For All Kings.

Scott Ian: "Cliff Burton Was The Most Original Human Being I Ever Met"