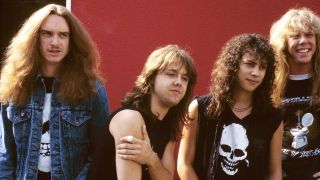 “I first met Cliff in San Francisco during one of Megadeth’s first visits up there, and he seemed like a man of character. Cliff used a very classical music approach. Visually, he made the Metallica front line very strong, and in an age when heavy metal bass playing was starting to have an unprecedented presence thanks to Steve Harris and Lemmy, Cliff was one of the first guys to really own the stage. To put a bass solo on a debut album was as ballsy as it got, especially in the era of über-shredding guitarists. He was clearly a driving force in Metallica, not just musically but also with his personality; he had a strong presence without ever being obnoxious.

“For them to relocate to San Francisco just for him to be in the band set the tone from the start. He was such a contrast to everything that most of us were doing back then; he had his own look and he gave a lot of extra depth to the band. The last time I spoke to Cliff was in New Jersey in 1986, at Metallica’s show supporting Ozzy. I was talking to Cliff about songwriting. What Cliff did on the bass was very different from what the other three did, and that was what made him so important. He brought dynamics into Metallica which they might not have had without him.”

“I first met Cliff at the Music Building in Jamaica, Queens in late 1982. We had a rehearsal room there and Metallica were there to record Kill ’Em All. They didn’t know they were also going to be sleeping in this room which was a squat in a shitty old building. My first impression of Cliff was he looked like he should be in Lynyrd Skynyrd and I think I asked him where he could even get bell-bottom jeans that wide in 1982. That said, we quickly hit it off. He had a great sense of humour and was absolutely the most original human I had ever met. They were all so different as people but in the context of a band, they were as one. Their souls were on display in every riff. Cliff was the most musical, he spoke with his ideas. He had an aloof, laconic attitude and style, not antisocial at all, just his own vision of things that was uncompromisable.

“I remember getting arrested together in London in March, 1984, in a Tube station on suspicion of having drugs. We spent the next six hours in cells while they tested the cold medicine they found in Cliff’s jacket. The police took Cliff back to the flat to search it. I sat in my cell in my underwear thinking we were done for, visions of Midnight Express running through my brain because there was weed at the flat. The metal gods were looking out for us that day, the police didn’t find it.”

“Cliff was a junior when he started with me, he would have been 16 or 17. He studied with me on Wednesday afternoons at ABC Music, a little music store in Castro Valley. The one thing I remember most was he always came prepared for the lesson. He had a lot of discipline. Cliff made the effort to learn to read standard notation – just one of the reasons why he was above average as a bass student. We studied baroque things like Bach. We’d talk about chords and playing melodies, and how the chord progressions fit together. We also got into the different time signatures – which I haven’t gone into with many students, but Cliff really enjoyed them. We did 3⁄4 and 6⁄8, and we also did 5⁄4 and 7⁄8 – and later on, when I heard the music he had pursued, it didn’t surprise me, because some of them looked very familiar! Not to the point of being a copy, but I was pleased to see how he took that stuff that we worked on and really made it into something exciting. A specific example would be what he did in Orion. The first time I heard it I thought, ‘Oh yeah, that’s what we worked on!’ He was a joy to teach and he made rapid progress. Subsequently I’ve had students who know about Cliff, and have come to me because they know I taught him.”

“I remember Cliff always saying that the fans and the press really understood Metallica in the UK. He loved touring in Europe; he always used to send me letters and say how great the beer was – at least when he wasn’t recording, which he didn’t like. Cliff followed his own drummer; he literally did not give a shit what other people thought. He had amazing self-confidence. Did it ever get annoying? Only when he flipped the finger at people! He used to do it when he was annoyed. I remember he did it once in a store, when the guy was being an asshole. Normally he was very polite and well-spoken, though.

“Weed was like oxygen to him, although he wasn’t a burned-out stoner, it just gave him an extra dimension. I don’t think there was much of a difference between Cliff stoned and Cliff not stoned! He was a pretty relaxed guy, but you couldn’t mess with him, he wasn’t a pushover. He was a strange mix of opposites; he would work on his car while listening to punk, and then he’d play chess and write poems while listening to Bach. He was a really late sleeper, it drove me crazy. He’d wake up in the afternoon, you couldn’t rouse him before that. Cliff was just happy when I knew him. He had a great group of friends and his band was going places.”