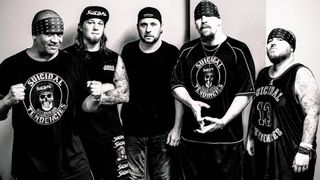 Dave Lombardo says he’s been “blown away” playing with Suicidal Tendencies and Misfits.

The former Slayer drummer first hooked up with Mike Muir and Suicidal Tendencies for their live shows earlier this year, and played on their recently released 12th album World Gone Mad.

Lombardo has also been behind the kit for Misfits’ classic-era reunion shows. And the sticksman says the whole experience has been a special time in his career.

He tells NorthJersey.com: “I’m a big fan of Suicidal Tendencies and it’s an honour for me to play with singer Mike Muir and the band. When I first received a call from a mutual friend saying that Mike was interested in me playing some shows, I said, ‘absolutely.’”

Lombardo says he was given a free reign to do what he wanted on World Gone Mad and adds: “They wanted me to be myself and their music is very drum friendly with some amazing structuring and vocals and lyrics. They gave me the freedom to do what I wanted and I gave the songs what I felt they needed.”

He adds: “Suicidal’s music brings back some really good memories. I remember driving the van on one of our early Slayer tours and me and Jeff Hanneman would listen to their first record and switch off singing the lyrics.”

As for his two appearances with Glenn Danzig, Jerry Only and Doyle Wolfgang von Frankenstein in Misfits, Lombardo says: “I knew it was something very special. You can’t imagine how musically satisfying it was. With the West Coast punk of Suicidal Tendencies and the East Coast punk of the Misfits – I’ve just been blown away.”

Lombardo is currently on the road with Suicidal Tendencies in the US, and will head out on tour with them again in January across Europe.