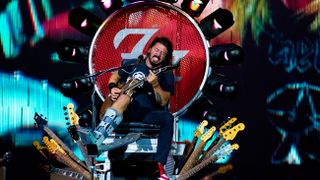 Dave Grohl performs from his throne in 2015 (Image credit: Getty)

Foo Fighters have settled a lawsuit they raised against insurance companies after a number of their shows were cancelled in 2015.

Earlier this year, Dave Grohl and co launched legal proceedings against various Lloyd’s Of London insurers as well as brokers Robertson Taylor. The band claimed the insurance firms colluded to reduce payments after several shows in 2015 were cancelled.

The cancellations came after Grohl fell and broke his leg while onstage in Gothenburg, Sweden, in June 2015 and had to pull the plug on a number of the gigs.

The lawsuit focused on three of them – two at London’s Wembley and one at Murrayfield in Edinburgh. Foo Fighters believe that because those venues were added to a list of revised dates which Grohl completed from a specially-made ‘throne,’ the insurers tried to called them “rescheduled” dates to reduce the payout.

The complaint reads: “After paying certain amounts owed under the Cancellation Policy for four of the cancelled performances, the insurers began searching for ways to limit their payment obligations on the other three performances, including the two Wembley Stadium shows, which represented the largest potential gross income,” Billboard reports.

Also included in the complaint was a claim that dealt with four shows cancelled as a result of the Paris terror attacks in November. Gigs in Turin, Barcelona, Paris and Lyon were pulled when the band’s website was reportedly hacked to display a pro-ISIS message. Foos claim they received “not a penny” from insurers in relation to those shows.

The complaint reads: “Foo Fighters reasonably expected that the Terrorism Policy would provide them coverage for the four November 2015 performances, which were necessarily canceled as a direct result of terrorism.”

US District Judge Manuel L Real signed the filing at a court in Los Angeles this month. The terms of the settlement have not been disclosed.