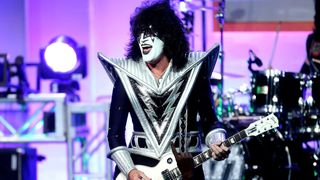 He took over guitar duties permanently from Ace Frehley in the band in 2002. And in a new Classic Rock feature on people who have stepped into the role left by famous axemen, Thayer says he had to do things by the book when he was finding his feet with Kiss.

He says: “It’s a big role to fill. I’ve been playing lead guitar in Kiss for almost 15 years and I’ve got very comfortable with it. With Kiss, particularly since I’ve been in the band, the style and direction has always been very defined. With the solos and the guitar parts, the idea was to play them exactly as they were written and performed before me.

“I don’t have a problem doing that because I grew up with Kiss – I knew all the stuff pretty well, so it wasn’t difficult for me to do that.

“When I see bands and they have a new guitar player and not the original guy, I like to hear the songs, the solos and guitar parts plated verbatim. That might change over time. Not so much live – those songs are the songs and that’s the way everybody wants to hear them.”

Thayer says he kept to the established formula for 2009’s Sonic Boom as they wanted it to sound “like a classic Kiss record” and adds: “When we did Monster in 2012, we decided to loosen that up a little more, so a little more Tommy Thayer came through.”

The full feature is in issue 229 of Classic Rock which is on sale now in print and via TeamRock+. The Replacement Killers article also includes Deep Purple’s Steve Morse and former Motorhead man Phil Campbell.