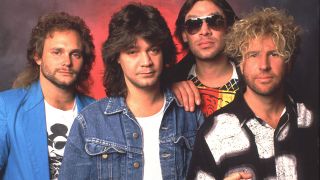 Sammy Hagar says he’d play one more show with Van Halen if he was given the chance.

The Red Rocker joined the band following David Lee Roth’s departure in the mid 80s and stayed in the lineup until 1996. He rejoined in 2003 for live shows before leaving the band for good in 2005.

He’s continued his solo career since then, along with working with his other projects including Chickenfoot and The Circle, but asked about Van Halen, Hagar tells OC Weekly (via Blabbermouth): “If there was ever going to be one reunion – you've got one more shot, one more, you're going to put the guys together – it would be Van Halen.

“Not for a tour, not to make a record, not to go on and on and on, because I don't think we're there. I don't think I can be in the same head space as those guys personally. We're in different head spaces, so I don't think we could create well together, but just one time for the good time? Van Halen, number one, hands down.

“If I said I've only got one more show left in my whole life, who would you want it to be with? Eddie Van Halen, Alex Van Halen and Michael Anthony. The good times and the stuff we made in the band, it was the peak of my life, musical life and career.”

Hagar continues: “Montrose, we never made it. It was a struggle. It was fun, it was lovely and I loved it. The first record is one of the greatest records I ever made in my life. Then, the solo stuff was great. I hit it big time. Double arenas, a couple of stadiums here and there. But Van Halen? We hit it.

“All number ones, selling out every show you'd ever play in your life anywhere, in any sized building in the world. It allowed me to build the tequila brand Cabo Wabo, it allowed me to be a household name long enough to say, ‘I think I'll keep a face in that house. I may have to do it on a TV show. Whatever I've got to do.’”

He adds: “If those guys wouldn't do it, I'd go park in their driveway and make them. I'd say, ‘I ain't leaving here. Al's going to come over eventually, so I'll get him when he pulls up and hog-tie his ass. Me and Mikey will sit in the car out in the driveway until they fold.'”

In 2017, Hagar said he wouldn’t want to deal with the “anxieties” that would come with a Van Halen reunion, but said he would consider it if Roth and Anthony were involved.

He told Billboard: “Everybody’s saying, ‘Well, what would it take?’ For me, no money, man. I don’t need money. I would do that for the fans and give the money to food banks or something.

“I’m not sure anybody else would agree with me, but that would interest me enough to sit down across the table from everybody and work that one out.”