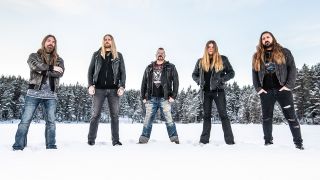 Sabaton have revealed that they’ll release a new studio album this summer.

The follow-up to 2016’s The Last Stand is titled The Great War, with the concept album documenting stories from the First World War. It’ll be released on July 19 via Nuclear Blast Records.

Sabaton began recording sessions on November 11, 2018 – exactly 100 years since the end of the war, and worked with Jonas Kjellgren over the span of the next three months.

The band say: “This is not the first time we sing about stories from this period in time, but now we felt the timing was right to make a full concept album about this war.”

Bassist Pär Sundström adds: “This is the biggest album we have taken on so far, there is so much depth and story around the songs that we never had before.

“Expect many surprises as we have tried new things and we also went back in time to a concept we know a lot of you love.

“The Great War has been created side by side with the Sabaton History Channel to make 2019 the most exciting year in our 20 year history.”

Sabaton have also released a trailer to go along with the album announcement. Find it below, along with The Great War’s cover art. A final tracklist will be revealed in due course.

The Swedish outfit have live shows planned throughout the summer, including a headline slot at the UK’s Bloodstock Open Air.