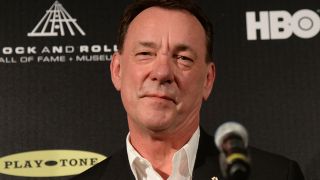 Rush drummer Neil Peart says he’s in two minds about touring again as he doesn’t want to leave his family for an extended period of time.

He, Geddy Lee and Alex Lifeson are still to decide whether they’ll hit the road this year, although two leaked tour dates briefly appeared online last month before being pulled. And while Peart’s reluctant to leave his loved ones behind, he says if they do play live, he’ll put everything into the sets as it’s part of his job.

He tells this month’s Prog magazine: “It’s a true dilemma – there’s no right answer. People say to me, ‘Are you still excited when you go on tour?’ Should I be excited about leaving my family? No, and no one should. It’s as simple as that: if you put aside the fantasy of it, it is what it is and has to be done. And that’s fine and I pour my entire energy and enthusiasm into it, but of course, I’m of two minds about the whole idea.”

And he says the thought of leaving his five-year-old daughter Olivia leaves him with feelings of guilt.

He continues: “I’ve been doing this for 40 years – I know how to compartmentalise, and I can stand missing her, but I can’t stand her missing me and it’s painful and impossible to understand for her. How can a small child process that? And there’s the guilt that comes with that – you fell guilty about it, of course. I’m causing pain.”

Rush no longer include support acts when on tour, preferring instead to play three-hour sets. But Peart says he misses socialising with other artists on the road.

He adds: “Someone sent me a picture of us with UFO the other day and we got very tight with them when they opened for us – musically and personally. It was a real treat. It was a good decision we needed to make to go on tour without an opening act but I miss that part of it – I miss the socialising.”

Rush are the cover stars of the new issue of Prog which is on sale now. Along with interviews with Peart, Geddy Lee talks about his love of wine and baseball, while artists including Steven Wilson, Mike Portnoy and Joe Elliott reveal their favourite tracks by the Canadian trio.