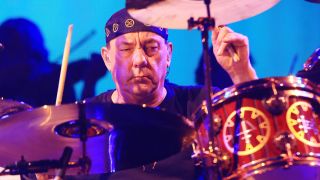 Alex Lifeson has revealed Rush drummer Neil Peart has chronic tendonitis – and it’s a contributing factor in their decision to end large-scale touring.

Peart has mentioned the condition before, and his bandmates have previously said the physical nature of his performance makes it challenging to continue into his 60s.

The Canadian giants recently announced their upcoming North American tour was likely to be the last of its kind.

Lifeson tells Global News: “I have mixed feelings about it. In one way I feel relief – I think 40 years is a long time to be touring the way we tour.

“I still love playing. But in Neil’s case, for example, his job is really tough. Playing the way he does is very, very difficult on his body. He has chronic tendonitis in his arms and he’s had problems with his shoulders.

“It’s getting to the point, no matter how much we love doing it, that it’s much more demanding and much more difficult.”

Lifeson has been rehearsing up to four hours a day ahead of weeks of full band rehearsals and a week of full production performances before the tour.

He says: “We rehearse ourselves to death. But it’s worth it. You hit the stage on that first night and you feel like you’ve already been playing for a month.”

And the guitarist believes there’s more to come when the tour ends – even if it’s just from Geddy Lee and him. He says: “Ged and I are just itching to get back into writing, for whatever purpose. We’ve always talked about doing some soundtrack work.

“Neil wants to take time off and spend more time with his daughter. He’d like to be more connected to his home life. I don’t blame the guy.”

Lee said in February: “We have to slow down, and slow down dramatically” – but added that he could see a future for the band in a lower-key format.