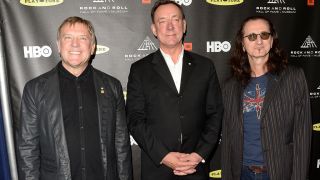 R40 Live will take in 34 cities kicking off in Tulsa, Oklahoma on May 8 and will conclude in Los Angeles on August 1.

Last year guitarist Alex Lifeson said they would play live again, although bassist/vocalist Geddy Lee later appeared to pour cold water on the idea, saying they hadn’t reached a decision. And earlier this month, drummer Neil Peart said he was in two minds about hitting the road again.

But now they’ve confirmed they’ll celebrate their 40th anniversary by playing tracks spanning their career. The full tour itinerary will follow in due course and the live dates will be their first since wrapping up their Clockwork Angels tour in August 2013.

The band are the cover stars of the latest issue of Prog which is on sale now. Along with interviews with Lee and Peart, artists including Steven Wilson, Mike Portnoy and Joe Elliott reveal their favourite Rush tracks.