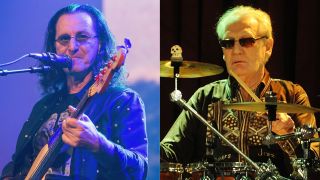 The Cream drummer died early on Sunday morning after he was admitted to hospital last month.

The music world gathered to pay tribute to Baker immediately after the news of his death broke, with Lee later posting his own message.

He says: “As a young musician few drummers stood taller or were a bigger musical influence than Ginger Baker. I will never forget the awesomeness of seeing him perform with Cream at Massey Hall on June 5, 1968, alongside the late great Jack Bruce and Eric Clapton.

“He was one of rock’s first virtuoso drummers and his incredible legacy lives on. Sincere condolences to Ginger’s family, friends and fans.”

Peart said: “He was really at the forefront of a complete revolution of rock. It is hard to find fault with the notion he was the pioneer of a rock drummer. There was no context for him, there was no archetype.

“Ginger Baker’s most notable achievement that should be recognised is the first rock drum solo. And me as a 15 year old kid at the time was, ‘Yeah, yeah – that’s the rock drummer I want to be!’”

Baker had suffered ill health in recent years, and was forced to cancel a number of live shows in February 2016 after a fall and being diagnosed with a serious heart condition which required surgery.

No cause of death has been made public.