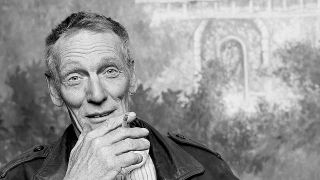 "In the 60’s, there were a few drummers that came onto the scene playing 'lead drums'," tweeted Mike Portnoy, as news of the death of Ginger Baker broke. "Ginger Baker was one of them, taking rock drumming to a whole new level of expression."

Baker may have professed to hate heavy music, but he did change it. He brought a love of jazz to his work with Cream, and as other attempted to follow he moved on, moving to Nigeria to work with the great Fela Kuti, and collaborating with a wide range of musicians, including Public Image Ltd, Hawkwind, stoner rock pioneers Masters of Reality, and jazzers Charlie Haden and Bill Frisell.

One of the last times Classic Rock saw him play live was at the annual Felabration, a tribute to Kuti held in London. Two kits were set up, one for Afrobeat pioneer Tony Allen, and one for Baker. He arrived late, left early, played little, and refused to come onstage when introduced.

It didn't matter. He still got an ovation. Baker had little time for the frivolities associated with being a musician, and we knew it. It was always, always about the craft. And there were few better.

Here's are six of Baker's best.

From: Cream - Wheels Of Fire
Arguably the Cream track that best demonstrates what Cream live, individually and collectively, were really all about.

Sunshine Of Your Love

From: Cream - Disraeli Gears
For mostly hi-hat-and-snare rock drummers in the 60s, Ginger’s primal beat and toms-battering style here was a revelation.

From: Masters Of Reality  - Sunrise On The Sufferbus
Typically unfussy yet mesmeric drumming on this track from MOR’s 1992 album, and here the wonderfully resonant sound of the drums is perhaps more notable than the playing itself.

From: Cream - Wheels On Fire
Despite Toad being to blame for the drum solo becoming de rigueur in rock shows, these 16 thumping minutes made many drummers in the 60s think about packing it in, and inspired countless others.