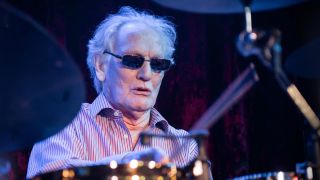 Ginger Baker has cancelled all his upcoming tour dates after being diagnosed with a “serious” heart condition.

The 76-year-old was due to play in the UK and US during April and May, then at this year’s Ramblin’ Man Fair in Kent in July.

A statement on the former Cream drummer’s Facebook page says: “It is with great sadness that we announce the cancellation of all shows. Ginger’s doctors have insisted that he have complete rest due to diagnosis of serious heart problems. We hope you will all join with his family in wishing him well.”