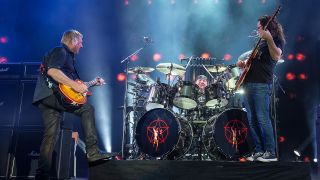 A new Rush film is set to hit cinemas across the world for one night only later this year.

It’s titled Cinema Strangiato: An Annual Exercise In Fan Indulgence and will take viewers inside Rush’s final R40 tour from 2015.

Fans will also get a glimpse into the “madness and passion” that went into the making of Geddy Lee's Big Beautiful Book of Bass – and features a brand-new interview with the Rush vocalist, bassist and keyboardist.

Lee says: “I’m excited for fans to see some new clips from our R40 tour but also a peek behind the scenes of making the Big Beautiful Book Of Bass.

Cinema Strangiato 2019 will be in select cinemas across the world on August 21 and has been made possible through a partnership with Concord Music Group, Anthem Entertainment and Trafalgar Releasing.

Senior vice president for acquisitions at Trafalgar Releasing Kymberli Frueh says: “Trafalgar Releasing is thrilled to bring Rush: Cinema Strangiato 2019 to theatres around the globe for the first of what we’re hoping will become an annual event – bringing fans together to experience a celebration of one of the world's most popular rock bands.”

Tickets will go on sale on June 20.