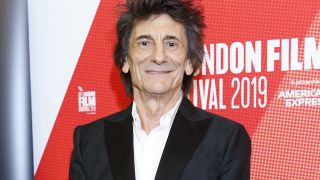 Ronnie Wood at the Somebody Up There Likes Me world premiere in London last month (Image credit: Nick England - Getty)

Eagle Rock Entertainment have released a trailer for the documentary film Ronnie Wood: Somebody Up There Likes Me.

It’ll launch in UK cinemas on November 26, with the Mike Figgis-directed film exploring the life and career of the Rolling Stones guitarist, including his music, art and personal life.

In the new clip, Ronnie Wood says: “I was in the hands of destiny all my life and in the right place at the right time. I wouldn’t change anything, except I would do it with my eyes open a bit more.”

The trailer also features interview snippets with Mick Jagger and Keith Richards, and with his friend and former Faces bandmate Rod Stewart.

The synopsis for the film reads: “A man still at the cutting edge in his seventies, the film tells the story from his humble beginnings in north London, where his older brothers shaped the musical powerhouse he would become, to his unique career that has not only spanned over 50 years – so far – but also traversed some of the most influential musicians the world has ever known.

“Ronnie guides us on a journey through his life – painting and performing, accompanied by the friends, musicians and artists who have been part of that life over the years."

Later this month, on November 15, the guitarist will release Ronnie Wood With His Wild Five – Mad Lad: A Live Tribute To Chuck Berry through BMG.

The performance was recorded at Wimborne’s Tivoli Theatre in 2018 – a night that saw guest appearances from singer Imelda May and pianist Ben Waters.

Mad Lad will include Wood’s track Tribute To Chuck Berry and Worried Life Blues, which was written by Maceo Merriweather, with the album artwork hand-painted by Wood himself.

Wood will also play with his band at London’s Shepherd’s Bush Empire on November 21.

Ronnie Wood: Mad Lad - A Live Tribute To Chuck Berry
Rolling Stone Ronnie Wood played a set at Wimborne’s Tivoli Theatre in 2018 as a tribute to Chuck Berry. The performance will be released on November 15. View Deal