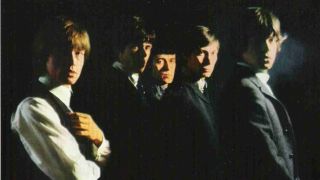 It’s an all too often overlooked fact that the coolest member of the Rolling Stones is Charlie Watts. Savile Row bespoke clobber and hot and cold running bloodstock aside the abiding characteristic that defines Charlie’s particular brand of cool is that the man literally couldn’t give a fuck. Never has, never will.

You can see it in his face.

An establishment populated by ex-forces blue blazer men recognised that look in Charlie’s eye and they didn’t like it. It was the look of the insubordinate: dumb insolence; a look that could - at least until December 31st, 1960 - have been effectively eradicated by the taming, draconian strictures of the National Service parade ground.

Laissez-faire gum-chewer Charlie, with his jazz club pallor, suede shoes and collar-length hair entirely exemplified an emerging breed of undisciplined louts whose default position was wilful disrespect for their elders and betters; a very British mutation of the yanks’ Coca-Cola reeking juvenile delinquents.

Prior to the arrival of The Rolling Stones, British pop groups customarily adopted the traditional forelock-tugging demeanour that had served generations of eager-to-please troupers well, as they politely reached beyond their social class from the nation’s stages.

Despite Lennon, the suit-wearing nascent Beatles were no more controversial than Cliff’s Shadows, with Eppy’s painfully middle-class refinement the perfect Scouse-smoothing conduit between ‘the boys’, the Beeb and business.

After The Rolling Stones, pop groups no longer endeavoured to compromise their way into the disapproving heart of the adult market, they actively sought to repel and alienate it, instigating a gaping generational divide that fuelled two straight decades of unparalleled rock creativity.

Music of black origin that had only previously been emasculated by white artists back home in segregated America suddenly saw its innate innuendos, covert euphemisms, primitive beats and ghetto grinds not just celebrated, but accentuated by young, libertine Brits whose ears heard no colour, just a righteous dissatisfaction they could entirely relate to.

Single-minded r’n’b enthusiasts to a man, the Stones (ostensibly still under the leadership of evangelical blues purist Brian Jones) would have probably stuck with recording nothing more than the sexed-up cover material that formed their house-packing Richmond sets for their LP debut, but the band’s street-sharp 19-year old manager Andrew Loog Oldham had other ideas.

The Loog was as cool as any of the Stones, and more so than some, it was he who had locked Jagger and Richard in a room to come up with the lucrative original material that latterly earned them their future and fortune, it was he who provided The Rolling Stones with sleeve-notes that simply stated: “The Rolling Stones are more than just a group – they are a way of life”, and it was he who provided the band with their single most important raw material: the narcissistic mod arrogance characteristic of all subsequent rock attitude.

While Epstein ceaselessly tried to calm his unruly mop-topped charges down, Oldham egged his wilful mal-chicks on to ever greater heights of parent-baiting slovenliness, but never once lost sight, and never once let the band lose sight, of their true worth. The Rolling Stones were not just another pop group, they were better. And to accentuate this fact beyond any doubt, it was decided that that their debut album should come housed in a sleeve that redefined total self-belief, impudent insubordination and unprecedented arrogance.

Nicholas Wright’s portrait shot captures a sullen quintet who can’t even be bothered to smile. In 1964, everybody smiled on their album cover, but The Rolling Stones - scowling out of the shadows - are way too cool for any of that tired, old show-business bullshit.

And, as if to add face-slapping insult to the Decca marketing department’s injury, The Rolling Stones insisted upon releasing their debut album with no words on the cover. Not even their name. No-one’s ever done this before. It’s regarded as equal to commercial suicide. But in their vainglorious, quintessentially British arrogance The Rolling Stones insist, get their way and go on to spend the next 50 years imperiously traversing the globe under the banner of ‘The Greatest Rock ‘N’ Roll Band in The World’… a description for which they even own the copyright.

So while we should be celebrating The Rolling Stones’ first album for Route 66, I’m A King Bee, Tell Me and all the rest; telling tales of Phil Spector shaking maracas while uptight old Gene Pitney looned about the place like Bez, its greatest legacy to rock’n’roll came courtesy of the wrapper it came in. Brian Jones’ petulant – slightly-closer-to-the-camera-than-anyone-else – sense of entitlement; Jagger, pouting patiently in half-shadow, waiting for his moment; broody, old Bill tucked away at the back; the terrible twins in midfield, Keith and Charlie, still not giving a fuck… trouble.

It’s a shot that carries the genetic material from whence came The Who, Led Zeppelin, Dr Feelgood, the Sex Pistols, JAMC, Stone Roses, Primal Scream, Oasis, The Libertines… if Charlie had only said ‘cheese’ we need never have witnessed the sorry spectacle of an Arctic Monkey dropping a microphone on the floor at 2014’s Brits.

So yeah, Britpop arrogance might not be all it used to be, but The Rolling Stones gave it birth and for that we should be truly thankful.