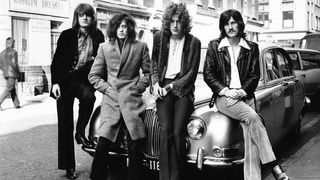 Robert Plant has revealed that he’s not a fan of some of his vocals from Led Zeppelin’s early days.

The vocalist, who recently released his latest studio album Carry Fire, makes the comment in an interview with the Guardian where Plant reflects on his life and career.

He says: “I realised that tough, manly approach to singing I’d begun on You Better Run wasn’t really what it was all about at all. Songs like Babe I’m Gonna Leave You… I find my vocals on there horrific now. I really should have shut the fuck up!”

Plant goes on to talk about his love of North African music which was sparked by a trip to Marrakech in 1972 – especially bendir hand-drumming – and reports that he still visits Morocco on a regular basis to find inspiration.

Plant says: “It helps get rid of the whole rock four-on-the-floor rhythm, which I liked. It forces you away from that world. Although playing them has wrecked my thumb-bone completely.”

The singer adds that he’s noticed that western music has begun to infiltrate the traditional sounds. “I hear the chord progressions of Coldplay in Marrakech now, which I’m trying to get away from!” he says. “But Berber music burrows into me, and why it does fascinates me. Why do I feel so enriched by hearing it? Can I try and do something with it that is part of me, part of the band, part of everything? So I did.”

Plant also reports that he was “basically tutored” by Alison Krauss on their landmark 2007 album Raising Sand and adds: “She’s a very precise singer who’s done more duets than you can shake a stick at, and I was thinking, ‘Help, I’m a rock singer, no matter what I do.’ But, of course, I’m not – I’m just a guy that sings songs.”

Plant will head out on tour in support of Carry Fire later this month, with dates planned across the UK and North America. Find a full list below.

Robert Plant on musical anthropology, harmony, and getting on a bit...