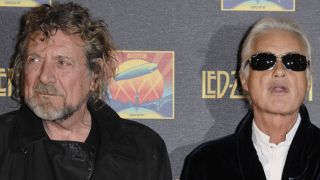 Robert Plant has reacted to Jimmy Page's recent outburst over a Led Zeppelin reunion by saying the guitarist needs "a good rest."

And he’s admitted the disagreement has caused friction between the pair.

Page last month revealed his frustration at Plant’s 2013 comments hinting at a reunion, reporting: “Robert said he was doing nothing in 2014, and what do the other two guys think? He knows what the other guys think. He’s just playing games and I’m fed up with it. I definitely want to play.”

Now the singer has responded by telling The National: “I think he needs to go to sleep and have a good rest, and think again.

“We have a great history together – like all brothers we have these moments where we don’t speak on the same page. But that’s life.”

Page curated the new series of Led Zep remasters, the first batch of which was released this week. Meanwhile, Plant remains focused on his next solo album, saying: “The new music I’m making is a melange of my travels through the more beautiful places with the most beautiful people in the music world. You get a very happy and very stimulating combination.”

The singer recently insisted that following Led Zep’s 2007 Celebration Day concert with a tour would have put him through everything he hates about the music business.