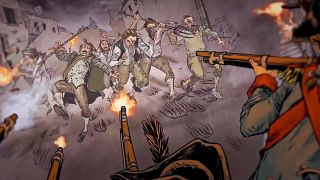 The five-minute work, which comes with a “not recommended for children” warning, explores the “chaotic and brutal events” behind the people’s uprising that began in 1789, leading to the execution by guillotine of many French nobles.

The result, says moviemaker Zombie, “brings to life the gory details, bloody battles, and terrifying events of the revolution.”