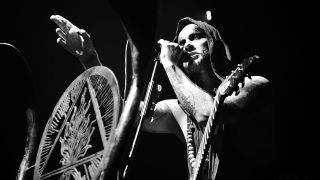 Behemoth have launched a website featuring a clip of new material.

Fans wishing to hear the audio footage – which lasts just over two minutes – are required to recite a short prayer before the snippet can be heard.

It features the children’s choir that frontman Adam ‘Nergal’ Darski revealed would be on the follow-up to 2014’s The Satanist back in February this year.

The website also has a countdown timer, suggesting that an announcement from the band is coming this Friday and comes just days after Behemoth teased fans with controversial artwork depicting Nergal as Jesus Christ.

That’s now been backed up with a second image, this time showing Nergal on an inverted cross which can be seen below.

The band confirmed they had begun work on what will be their 11th album in November last year at Gniewoszów’s Monochrome Studio in their home land of Poland, with Nergal telling Full Metal Jackie last month that it had a more “organic sound” to their previous work.

He said: “The Satanist was recorded four years ago. We've been living our lives, we've been going through different periods and we have changed again. So it's different music – it's a different endeavour.

“But what we captured this time is maybe an even more organic sound yet still very striking and very aggressive.

“It's going to be a different record, a different approach. I don't want to talk much about it, because we've got to stay confident about it and just keep it to ourselves.

“But the whole structure of the album, the way it's built, it's one of a kind and it's something that we've never done before.”

Behemoth will head out on tour across North America with At The Gates and Wolves In The Throne Room from October.