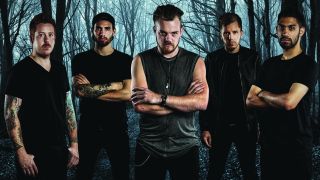 The Raven Age guitarist George Harris has revealed how he gave up on a promising career as a professional footballer to pursue a life in metal.

Harris, 25, is the son of Iron Maiden bassist Steve and his dream job was always to be a soccer star. He takes after his father both when it comes to music and in his love for sport, with Steve having once been on the radar of scouts for his beloved West Ham United.

George had trials with various clubs and was made an offer by one Norwegian team, but opted to put his efforts into The Raven Age instead.

Speaking to TeamRock after the band’s performance on the Sophie Lancaster Stage at Bloodstock today (Saturday), Harris says: “My dream job was always to be a professional footballer.

“My dad never pushed me towards music, but I did start playing the guitar when I was 14 and then started writing songs when I was 17.

“But I was so into football and had loads of trials for different teams. When I was in Norway for trials I wrote a lot of songs that ended up being played in The Raven Age.”

Harris’ bandmate drummer Jai Patel says he was stunned to learn who the guitarist’s father was.

Patel says: “I had no idea when I hooked up with the band. I went to George’s house and it became clear to me. It’s pretty surreal.

“The Maiden tour has been incredible. The fans have been really good to us.”

Harris adds: “It went better than I expected. I have seen some of my favourite bands support Maiden people giving them shit, like throwing things at them. So I half expected the same to happen to us!”

George’s sister Lauren is also a musician, as well as an actress, and she supported Maiden on tour back in 2008.

When he decided to chose music over soccer, Harris and his bandmates were thrilled to be given the opportunity to support Iron Maiden on their Book Of Souls world tour.

And as their fanbase continues to grow, the band hope to expand that even further with the release of their debut album Darkness Will Rise in December.

Harris adds: “We had planned to have it released already, but we decided to hold it back until after the Maiden tour to make the most of the opportunity.

“And since the tour, we’ve been approached by a few record labels. We are speaking to one of them in the coming weeks and hope something good comes of that.

“I think anyone who liked our self-titled EP will really like the album.”

Darkness Will Rise is available for pre-order now. The band open for Mastodon in Belfast on August 1 and Dublin on August 15.