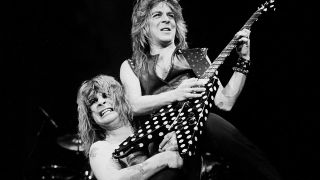 Last week, a number of items that once belonged to late Ozzy Osbourne guitarist Randy Rhoads were stolen from the Musonia School Of Music – the centre that was founded by Rhoads’ mother Delores in 1948.

Thieves broke into the school in Hollywood, California, on Thanksgiving and made off with several guitars that belonged to the guitar icon, along with other instruments and memorabilia.

That led Ozzy to offer a $25,000 reward for information which would lead to the arrest and conviction and/or return of all stolen items.

It’s now been reported by news network ABC7 that some of the items have been recovered – including a guitar, amps, photos and other memorabilia.

The items were found by North Hollywood resident Bobbi Fredriksz, who saw the items in a dumpster while she was out walking her dog. It wasn’t until she returned home and saw a TV report about the theft that she realised what she had seen earlier.

Fredriksz says: “I was laying in bed, not feeling well, when it came on I was like, ‘Wait a minute. Oh my God!’ I ran all the way back over and it was still there. Somebody else started to see it and called police.”

Fredriksz says she dragged the items out of the bin to protect them from rain.

Rhoads’ nephew Nick D’Argenzio has also thanked Ozzy and his family, telling thee network: “We’re really grateful to the Osbourne’s for the help in promoting the news about it."

Among the items taken were Rhoads' first ever electric guitar and an amp the guitarist used while he was a member of Quiet Riot in the 70s.

Ozzy listed some of the items that were taken last Thursday along with images and has urged those with further information to contact: D’Argenzio either by phone: 818-281-7893 or email: nickdargenzio@gmail.com