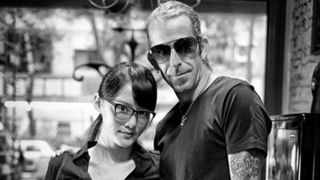 Randy Blythe is to star in a Taiwanese action movie being made by metal band Chthonic.

The Lamb Of God frontman became friends with the members of Chthonic when both bands played at Ozzfest 2007. Since then, he’s performed with them in Taiwan and he and his wife have spent time there on holiday.

Chthonic singer Freddy Lim recently asked Blythe to appear in a film and he jumped at the chance.

In a post on his Instagram account, he says: “The movie is supposed to primarily be a comedy with lots of action and, knowing Chthonic, a bit of politics. Without giving away too much of the plot, let’s just say there’s a bit of civil unrest my character and the star of the movie – who’s a really famous actor in Taiwan – participates in.”

Blythe also posted a picture of himself with Chthonic bassist Doris Yeh on the set.

He adds: “These are not my sunglasses. I’m supposed to look ‘rock star-ish’ and my regular clothes weren’t rock star enough – I guess the army surplus store on the south side of Richmond, Virginia doesn’t carry rock star duds.

“The sunglasses make me feel like a 1970’s Asian film star though — kinda like late-era Bruce Lee. But a lot taller. And not Asian. And without being able to crush someone’s chest with a one-inch punch. Okay, so I’m not like Bruce Lee at all. Still, it’s gonna be fun.”

The film hasn’t been given an English title yet, but Blythe says he will keep fans updated.

Lamb Of God will release a new album next year, while Blythe’s book about his manslaughter trial ordeal will be out around the same time.