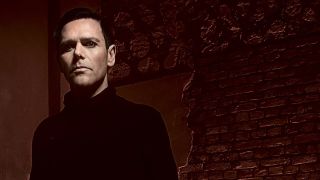 It’s 25 years since the Berlin Wall fell, and the history of Germany’s once-divided capital is fading into memory. In the former East Berlin, the creeping tendrils of western gentrification have dismantled all but the most tenacious vestiges of its communist past. Where once there was Soviet Bloc austerity, today the streets are lined with swanky boutiques, expensive cars and trendy cafés.

In one of these very cafés, in the formerly dilapidated borough of Prenzlauer Berg, sits a man who knew East Berlin well. Richard Z. Kruspe spent his formative musical years in this half of the city, juggling dreams of becoming a rock’n’roll musician with the realities of life under the boot- heel of the authorities . “I moved here when there was such a great music underground,” he says in flawless English, a half-drunk pink smoothie on the table in front of him. “People were making music all the time. Even though it was hard because it was controlled by the government and the secret service, there was this energy that East Berlin had. And for some reason it was gone after the Wall came down. It was like somebody else took over.”

Just as it’s been a long time since the reunification of Germany, it’s been almost as long since Richard Z. Kruspe was a struggling underground musician. For the past 20 years, he has been guitarist and chief songwriter with Teutonic titans Rammstein, that most German of German bands and the country’s most successful musical export of the last two decades. But he’s not here on Rammstein business today. Five years after their last album, Liebe Ist Für Alle Da, the future of that band is uncertain. Instead, Richard’s energies are being poured into Emigrate, the band-come-collective he put together with bassist/co-producer Arnaud Giroux in the early 00s as an escape from the insanity of his day job. Emigrate are a sleek black Porsche next to Rammstein’s relentless Panzer division. The duo’s second album, Silent So Long, picks up where their self-titled 2007 debut left off. You can hear echoes of Richard’s other band in its industrial- tinged electronic pulse, but it’s a more human, less colossal construct. Till Lindemann’s city-flattening baritone is replaced by Richard’s own distorted, but notably more conventional vocals (a point of difference emphasised by his decision to sing in English). More significantly, there’s a stellar guestlist that takes in Lemmy, Jonathan Davis, Marilyn Manson and electro-clash nutjob Peaches.

It’s no secret that Emigrate was born of Richard’s frustration with Rammstein, and with Berlin. There were strains with his bandmates, and the democratic nature of decision-making. And then there was his out-of-control drug use. “I was killing myself,” he says plainly. “I was doing too many drugs. I took drugs just to work. Constantly, constantly, constantly. My band, the city, my drug use… I needed to get out of it. I had to leave to keep something. If I didn’t, it probably would have destroyed Rammstein.” In 2001, he and his then-wife, South African actress Caron Bernstein, moved to New York. It was there that he met Arnaud and put together Emigrate. Their debut’s energy pulses with the restless energy of that city. “I’m a big believer in energy, and the energy was just rolling and rolling in me,” he says. “I would come up with three or four songs a day. Where Berlin, for me, is really destructive. It brings the dark things out of me. All my drug problems were in Berlin, never New York.” Richard had moved to the city in the late 80s, when he was 19 or 20. Growing up in a small town in the north of East Germany, his early years were marked by rebellion: dyed hair, earrings, loud music. Tame stuff now, but revolutionary at that time, in that country. “My stepfather beat the shit out of me over the years,” he says. “But he beat discipline into me. The only thing I never did was give up. Even when I couldn’t see the sense of something, I’d see it through.”

When he talks about his early years, it sounds utterly alien: training to be a chef after school, he had jobs as a driver (until he crashed), a window-cleaner (until he discovered he didn’t like heights) and a jeweller – the latter until the East German secret police tried to recruit him as an informer. “One of our friends escaped and the Stasi picked me,” he recalls. “This guy said: ‘You have two choices. You can help us or you can go to jail.’ It was unbelievable, the guy knew everything about me. He said we had to work together to make the government a better place – he would meet me in one week and I would decide what to do. I thought, ‘I can’t be a rat…’ The rumour was that one in every three people was an informer, so I went around telling everyone about what happened, figuring they’d realise I talked too much and that I wasn’t usable. One week later, the guy never showed up.” Somewhere along the way, Richard had bought a guitar, though carving out a career in music was nearly impossible in East Germany. “You couldn’t be a professional musician unless you were approved by the government,” he says. In 1988, he escaped to West Germany via Hungary, hoping it would offer him the chances he never had. Butit didn’t quite work out like that. “The hard part was not moving, it was being in the West part and never being able to go back to the East part. The realisation that you would never see your family, your friends, your favourite things again. When I realised that, I went really downhill.” He shrugs. “I didn’t know the wall would come down.” On November 9, 1989, the Wall did come down, radically altering the shape of countless European lives in the process. Richard remembers watching the whole historic and dramatic story break on the news, and rushing out to watch events unfold in real-time. “We were walking back and forth through this checkpoint,” he says. “We weren’t sure whether they’d keep it open. It was definitely something I’ll never forget.” But his old life wasn’t forgotten in that bright new dawn. In 1994, he founded Rammstein with fellow former East German natives. The band’s heroically provocative approach was a reaction to the travails of the past and its impact was huge and enduring. “The reason Rammstein was so progressive in a way is that we feltso much censorship back in the day. In Rammstein, we were trying to get rid of that censorship – from other people and from ourselves. That’s why we went: ‘What the fuck, we’ll do all this, we don’t care.’”

Rammstein may currently be inactive, but thanks to their unassailable reputation and status as one of the biggest rock bands on the planet, they cast a long shadow. Surprisingly, given the Stasi-like secrecy that surrounds that band, Richard is happy to talk candidly about them. Perhaps ‘happy’ is the wrong word. When he mentions them, it’s with a mixture of pride and frustration. Tellingly, it’s almost exclusively in the past tense. “I really do like being in the position with Emigrate where I know I can call the last shot,” he says. “In Rammstein, it was always a democracy. It was always frustrating trying to get your vision through. There are two sides to Rammstein. One side, I’m proud of what we’ve done. The other side, I’m proud to get away from. It’s hard, these days.” Are you frustrated with the pace of life with Rammstein? “It’s getting quieter. We just met a couple of weeks ago to talk about the future. I played them the tracks, and they were open and happy about it. It was a good feeling.” Are you planning a new Rammstein album? “I’m not. ”Are the others planning a new Rammstein album? “I don’t know. Ha ha! They have nothing else to do.” Could you imagine your life without Rammstein? “Yes,” he replies, emphatically. Do you look forward to that day? “[Brief pause] Kind of, yeah.” Is there a point where Emigrate will take over from Rammstein? “I can’t answer that. There’s the saying, ‘If you want to make God smile, tell him your plans.’ Rammstein has been such a big part in my life, or had been, but there’s so much more I want to do in life. People aren’t selling records, so they have to go out there to make money, like the Rolling Stones. I would love to see Rammstein not make the same mistake. Leave it as it is, in the way of good memories.” You’re making it sound like Rammstein are finished. Are they?“No!” he says emphatically. “Not at all. To me, Rammstein and

Emigrate belong with each other. They’re black and white. Rammstein has a future if they give me space to do what I need to do. ”Arnaud Giroux has a better take on the relationship between Richard and the band with which he made his name. “He’s a workaholic,” says the Frenchman. “When he has a schedule for Rammstein, he’s like, ‘[Sighing] Ah, again, again, I’m doing it again…’ But when he’s in the process of writing, he’s right there. Rammstein is feeding Emigrate, and Emigrate gives him space for Rammstein. ”It’s a dynamic that seems to work well right now. Emigrate gives Richard the space he doesn’t get in Rammstein. Rammstein… well, Rammstein keeps the swimming pool heated; an abiding, formidable presence in spite of their current silence. But unlike Richard Z. Kruspe’s hometown, whether these two halves of the same whole ever need to reunite is another question entirely.

Five things you never knew about the Berlin Wall

Official figures suggest that the number of people killed while attempting to cross the wall stands at 136. After the wall was constructed, subway trains were only permitted to operate on the side from which they were based. The West side of the wall ended up being covered in graffiti, while the East side remained completely bare. A perfect metaphor for life on both sides? While November 9 1989 is regarded as the ‘Day The Wall Fell’, official deconstruction actually began in mid-1990. Leather-clad Baywatch star David Hasselhoff performed cheesetastic single Looking For Freedom on top of the wall in 1989. Despite his appalling crimes against music, The Hoff remains a huge star in Germany, largely thanks to the enduring popularity of 80s cult classic Knight Rider.