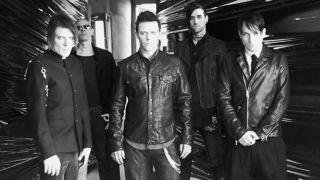 Guitarist Richard Kruspe has revealed he doesn’t like recording with Rammstein – and prefers spending time with his side project Emigrate.

And he says egos in the band dictate the direction on the group – not the music.

He tells Ultimate Guitar: “Rammstein is so democratic and often decisions are being made because of the egos – not because of the music. I don’t have that in Emigrate.

“It makes the studio experience so much more pleasurable in Emigrate than in Rammstein. But there is a responsibility that we have being in a band like Rammstein. So if you’re asking if I enjoy recording with Rammstein, no I don’t.”

He continues: “It brings me the balance to still be in Rammstein. Without Emigrate I couldn’t even think of staying there – now it’s doable for me. Emigrate balances me out which is something I was always looking for.

“I have a perfect balance in my life. I have Rammstein with the big show and then I have Emigrate making good records. I’m quite happy with the situation. Also, how do you compete with a band that has one of the best live shows? So for now, Emigrate is a studio band.”

Kruspe and Emigrate will issue their second album Silent So Long on November 17 via Spinefarm Records. The project features guest appearances by Lemmy, Korn’s Jonathan Davis, Peaches and Frank Delle from Seeed.

He previously said recording with Lemmy was one of the greatest moments in his career.