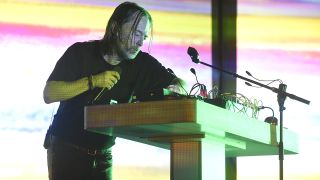 The BBC have confirmed that Radiohead frontman Thom Yorke will be a guest on the long-running Radio 4 favourite Desert Island Discs later this month.

It’ll be broadcast on Sunday, September 22, from 11.15am until 12noon, and will see Yorke choosing eight of his essential tracks, a book and a luxury item that he would live with if he was a castaway on desert island.

Laverne took over the hot seat of the popular show on a permanent basis earlier this year after former host Kirsty Young stepped aside in 2018.

Yorke launched his new solo album Anima in June, which was accompanied by a “one reeler” Netflix film also titled Anima on the day the record was released. The film was created by Paul Thomas and featured three tracks from the record.

Yorke is also currently preparing to head out on the road across North America on his Tomorrow’s Modern Boxes project with Nigel Godrich and audiovisual artist Tarik Barri.

Those shows will get under way in Laval, Quebec, on September 26 and conclude at the Greek Theatre in Los Angeles on October 29.

Thom Yorke: Anima
Radiohead frontman Thom Yorke released his new album Anima in July this year and marked the release with a short Netflix film of the same name.View Deal