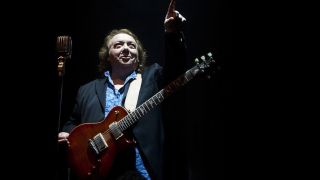 Bernie Marsden has released a video for his re-recording of the Whitesnake classic Trouble. Dedicated to the memory of Jon Lord, the track features David Coverdale on vocals and Ian Paice on drums, while the video contains some previously unreleased fan footage filmed at a Whitesnake show at Newcastle City Hall in June 1980. The new version of Trouble is taken from Bernie's recent album Shine.

“This video is very special. A few months ago I was given a reel of film by a fan of a Whitesnake gig at Newcastle City Hall on the Ready an’ Willing tour in 1980. It is unique and unseen footage of the classic early Whitesnake line up.

“Having had the enormous pleasure of hearing David Coverdale as a guest vocalist, and Ian Paice on drums on the track it seemed a perfect time to release just a little piece of it. It’s a little grainy, but it is the real deal, with Jon Lord in classic style on the Hammond organ. Many thanks to the people of the North East in the film, and of course the whole of the Whitesnake army out there.

“Special thanks to Mark Smith for his camera work and great editing. Hope you enjoy it, those on tour Snake memories flood back!”

Bernie supports the new album with four dates this week, before guesting with Joanne Shaw Taylor during her UK dates in November.

For full dates, visit Bernie’s website. Bernie’s track-by-track guide to Shine may be viewed below.