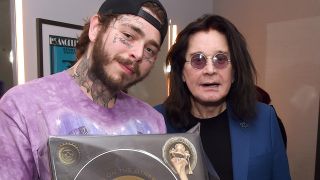 Ozzy revealed he had the disease earlier this month during an appearance on Good Morning America, with his wife and manager Sharon Osbourne later revealing there had been an “outpouring of love” for her husband in the days after the revelation.

In a conversation with Rolling Stone, Post–  who collaborated with Ozzy on the track Take What You Want last year – says he had no idea Ozzy has been battling the disease when they were working together.

He says: “Working with him and hanging out with him and being around him, you can’t tell. You can tell he has a little difficulty getting around, but he’s so strong.”

As for new Ozzy’s material, Post continues “I know he’s been working on a new project with a bunch of my friends, and I’m really excited for him because he’s so passionate about it and it sounds incredible – he sounds incredible.”

Ozzy is suffering from Stage 2 Parkinson’s when stiffness and tremors worsen and sufferers may experience symptoms of the disease on both sides of the body.

Sharon previously said: “There's so many different types of Parkinson's. It's not a death sentence by any stretch of the imagination, but it does affect certain nerves in your body. And it's like you have a good day, a good day, and then a really bad day."

At the end of last week, Ozzy thanked fans for their messages of support, saying: “Thank you all so much for your well wishes. It means the absolute world to me.”

Ozzy will return to the stage in Atlanta on May 27, while a full list of his No More Tours 2 dates can be found on his Facebook page.