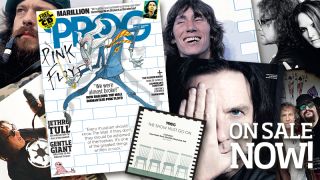 It’s been 40 years since Pink Floyd released The Wall, their epic double album that dwelt on themes of isolation and alienation. It certainly struck a chord with many listeners, topping the US charts for 15 weeks, whilst it’s resultant single Another Brick In The Wall Pt. 2, a rarity for Pink Floyd, was No. 1 in the UK charts as the 70s ended and the 80s began.

We discuss the album, the live shows and the movie with participants Nick Mason, Bob Ezrin, Gerald Scarfe and Bob Geldof as they reflect on the epic work. “Under that schoolyard bully affect, Roger was actually quite a sweet guy,” Ezrin even admits.

And music from Dave Foster Band, Oak, Moonsnhot, Stuckfish and more on the free CD.

You can buy the latest issue on sale here.