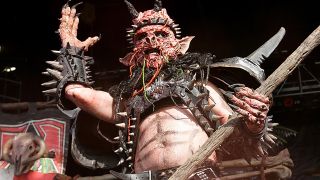 The future of the statue of Confederate General Robert E. Lee in Richmond is currently the subject of a legal tug of war.

However, a county circuit judge has now temporarily blocked the removal of the statue, granting a 10-day injunction which was brought by a local resident.

Now a petition has been started to have Lee’s statue replaced by one of Gwar's Oderus Urungus, aka the late Dave Brockie.

The petition reads: “Robert E. Lee is a failed war general that supported a racist cause. For too long, the city of Richmond has been displaying statues of him and other loser civil war veterans.

“We, the scumdogs of the universe, call on the city of Richmond to erect a statue of great local leader Oderus Urungus in its place.

“While Oderus comes from the planet Scumdogia, he called Richmond his home, working with the local art community and employing local artists and ladies of the night.”

The campaign has even drawn the support of former Gwar member Danielle Stampe, aka Slymenstra Hymen, who posted the news on Facebook

At the time of writing more than 18,000 people have signed the petition, while GWAR Scumdog, who started the petition, is calling on people to donate if they can to Richmond's COVID-19 Arts and Culture Relief Fund.

Statues of Confederate generals and soldiers have been the focus of much debate recently, with many people saying they honour the memory of those who fought to uphold slavery.