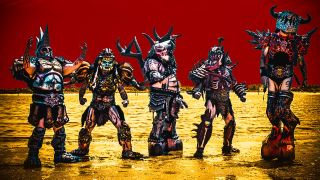 When we caught up with GWAR earlier this month, it was an exercise, in theory, to find more about their new album The Blood Of Gods – their first since the death of founder member Oderus Urungus, their first since Donald Trump was elected President and their feud commenced, and their first with Blothar taking lead vocal responsibility.

Obviously, it didn’t quite play out that way. So here’s our chat with longtime drummer Jizmak Da Gusher on blood, BBQ, and why it pays to party with Jerry Springer.

The Blood Of Gods is your first album since you lost Oderus Urungus – how did it feel to make an album without him?

“GWAR isn’t an emo band, we don’t have feelings. I don’t concern myself with such things. The difference in this album compared to the other albums with Oderus is that the producer wasn’t killed and there’s no singing over the guitar solos. The Blood Of Gods is like nothing you’ve heard from GWAR before. Oderus would be proud of this album. GWAR’s continuing conquest to dominate the inhabitants of this planet is exactly what Oderus would demand. Hail Oderus!”

How would you introduce Blothar The Berserker to those who are yet to meet him?

“I advise that you meet him at a buffet. While he’s eating might be only moment where his attention is distracted enough so you survive the experience. They call him The Berserker for a reason.”

You’ve said The Blood Of Gods is “a sacred text chronicling the rise of humanity against their makers” – is there a serious point hidden in there about the state of the world at the moment?

“Take a look around, they’re everywhere. Humans! You make me sick! Parasite on a planet! You must be destroyed!”

“He’s some bloated molester that’s feeding rats to children. This corporate icon has brainwashed the masses into eating enough junk food that it’s mutated their genes for generations. It’s a point of pride with GWAR that we are the true annihilators of the human race. When someone comes along and steals GWAR’s thunder, we take it personally.”

“I can’t. I don’t know how to cook. However, anything is great slathered in GWAR B-Q sauce. It’s Balsac’s own recipe. I prefer the moose knuckle, it’s delicious!”

Who is the most terrifying member of GWAR, and why?

“Balsac. Definitely Balsac. His hideous syphilitic face beneath the bear trap jaws will melt your face off if you lay eyes on it. Plus he’ll chomp your head off. What’s not to love?”

Of all the appearances you’ve made on TV and film over the years, which has been your favourite?

“Jerry Springer was the best. That guy knows how to party hard – he even wrote a cheque for the hookers. Never once paid for drugs though.”

Regarding your song El Presidente, which member of GWAR would you choose to take on Donald Trump in a one-on-one fight, and who would win?

“We would all gladly play a hand in Trump’s demise but I believe Beefcake already has his severed head. It was all over the Twitterwebs. I’m pretty sure the Trump you’re seeing on TV now is just a hologram or something. We will most likely resurrect his corpse every night on tour just to kill him again night after night to the glee of the audience. It was a good kill that’s worth doing over and over again. He’s like potato chips, you just can’t eat one.”

GWAR’s new album The Blood Of Gods is out now and available to order from Amazon.