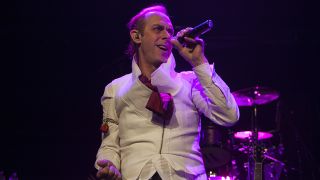 Peter Murphy and David J have announced that they’ll head out on tour across the UK and Europe later this year to celebrate the 40th anniversary of Bauhaus.

They’ll kick off the run with two shows in Russia before heading out for a further 22 dates, which will see the pair perform Bauhaus’ 1980 debut album In The Flat Field in its entirety. They’ll also play a selection of Bauhaus classics during an extended encore.

The goth legends went on to record another four records following their first release, their last being 2008 comeback album Go Away White, before splitting shortly after its release

Murphy has also released 10 solo studio albums – his latest was 2014’s Lion which was followed by the live package Bare-Boned And Sacred in 2017.

It’s also been revealed that later this year, a series of coloured vinyl Bauhaus reissues will arrive, with further details to be revealed in due course.