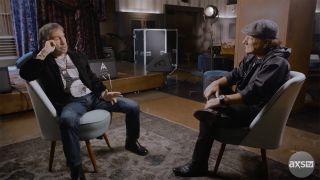 This Sunday, Brian Johnson’s Life On The Road returns to TV screens across the US, with the latest episode featuring the AC/DC frontman in conversation with Bad Company vocalist Paul Rodgers.

The show will broadcast through AXS TV on Sunday night (November 24) at 9pm EST, and in a clip from the episode, Rodgers talks about starting out in Bad Company with guitarist Mick Ralphs – and their search for a manager.

Rodgers says: “We decided we needed strong management, so I said to myself, ‘Well, the biggest band in world is Led Zeppelin. Who manages them?’

“So I got in touch with Peter Grant – I can’t believe I did that, and I said, ‘I come with a band, Peter and we call ourselves Bad Company.’ He goes, ‘Oh, Bad Company? I don’t know about that!”

Rodgers says Grant agreed to come and see them rehearse in a village hall in Surrey, but Grant failed to show up. However, just as they were packing away their gear, Grant walked in and said: “I was listening outside – I like what you guys do.”

Rodgers adds: “That’s the way he was, he was a very mysterious man, but he decided he was going to take us on.”

And Rodgers says that rather than sign a contract right there and then, the deal was sealed with a handshake. Watch the full clip below.

Brian Johnson’s Life On The Road was originally broadcast in the UK in 2017 with the final episode on December 2 featuring Mick Fleetwood.