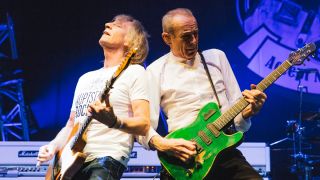 Rick Parfitt says he won’t return to performing with Status Quo in any capacity.

The veteran guitarist suffered a serious heart attack on the road in June and his management later revealed he’d “died for several minutes” during the incident.

While he is expected to make a full recovery, he won’t play any part in the band’s current run of farewell electric shows and he now reveals he won’t return to Quo in any performing capacity – although he remains involved in Quo’s business activities. He has been replaced by Richie Malone and after the tour ends on December 23, Quo will only perform acoustic shows in the future.

Parfitt tells Classic Rock’s Dave Ling that he won’t go to any of the electric shows and that he has no interest in being a part of any future acoustic gigs.

“Plus, standing there in the audience… no, I don’t think I could do that, but I do wish Richie Malone all the best. He’s a fucking good little player and it must be all of his dreams come true.”

And on whether he will ever return to Status Quo in any capacity, he adds: “No. I don’t think I really want to. In my heart I’m a rocker, I’ve always been. If I’m going to make music it’s got to rock.

“There would probably have been room for me if I decided I wanted to, but I’m not a great fan of the whole acoustic malarkey. It doesn’t float my boat. What I am disappointed in is missing the last of the band’s electric shows.”

Parfitt, 68, adds that he is healthy and says he recently passed his driving test. “I would say that I’m fully recovered,” he says. “As the weeks pass I’m better and better. I don’t know whether I will be able to improve on that because I feel as well as I did when I fell over.

“So I can’t complain. I’ve just passed my driving test – which was incredibly stressful at my age – but I’m mobile again now, so that’s a big difference.”

If he hadn’t been struck down by ill health, Parfitt says he would have ideally liked to wrap up Quo’s full electric touring career in 2017, to celebrate the band’s 50th anniversary. But he says Francis Rossi was adamant that the current tour would be the last.

Parfitt says: “Francis wanted to stop anyway, which I didn’t really agree with. Next year is 50 years of hits – that’s when we should have stopped. But once he digs his heels in that’s it and nobody else can do anything about it. We could have rocked on a bit more, but this is nature’s way of telling me to take a breather… for now.”

He says that if Quo were to go back on the decision to call it quits in terms of electric shows after this tour, it would be with his blessing.

“Let them do whatever they want to do,” he says. “It’ll be with my blessing.

“Francis will do what Francis will do. I shall not say anything to the contrary because I don’t want any bad feeling. After 50 years of travelling the world together that’s the very last thing I want.”

The full interview with Parfitt will be published in the next issue of Classic Rock magazine, due to hit the streets on November 28. It will also be available via TeamRock+.

Status Quo’s Last Night Of The Electrics tour ends in Liverpool in December. Fans have been offered refunds if they’d rather not see the band without Parfitt

Status Quo The Last Night Of The Electrics tour 2016