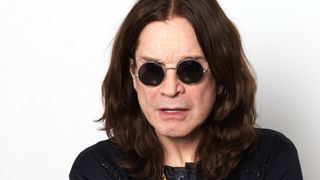 We find out what’s going on in the mind of Black Sabbath frontman and all-round living legend, Ozzy Osbourne.

“I remember the time when my father was offered voluntary redundancy: a big, fat, juicy cheque. I asked him: “What are you going to do?” He said: “I’m just going to quit and do some gardening.” So he got made redundant, did the garden, and fucking died. I can see myself going the same way if I retired. I’ve got to work; I’d go crazy if I didn’t. Most of my time is spent watching DVDs in hotel rooms, so the best part is the gig. If I can’t do a gig or make an album, I’m fucking pissed off.”

“My immediate family calls me John. In these AA meetings that I go to I identify myself as John, because I don’t want to say: “I’m the big shot.” The meetings are working for me. They’re at the Rainbow [Bar & Grill on Sunset Strip], where I used to get fucked up years ago. I go nearly every day. You talk about whatever’s on your mind, whatever’s bothering you. Because that’s what gets us thinking about drinking again. In Hollywood they have these open-top tourist vans. Sometimes when I come out of the Rainbow there’s one of these buses stuck in traffic stopped right outside. Everyone’s like: ‘Oooh! It’s him!’ Fuck off.”

“The drugs were just the spoils of war. You start with tobacco or alcohol and you just up the scale. I remember my first line of cocaine. I was like, ‘Oh, I can’t go anywhere near coke. That’s serious shit. I don’t want any of that’. But I had the line and I went BING! And that was the end of me. I was banging it up my fucking nose every five minutes. It’s like wonderful powder. You think everything’s wonderful. And then you’re lying in your fucking bed at 7am with daylight coming in and your heart jumping out of your fucking chest. That ain’t so cool. You start getting religious: ‘God, let me sleep and I promise I’ll never fucking do it again’. You eventually get to sleep then you wake up and do another fucking line.”

“I don’t snort ants anymore – I can’t even remember doing it in the fucking first place. When you’re fuelled on drugs and alcohol, you do things to have a mind-altering experiences. But then you wake up and you don’t know how the fuck you got there. I just changed. Some people don’t – and they die. Most of the people I used to go drinking with are dead. If I wasn’t Ozzy Osbourne the rock ‘n’ roller but I was still Ozzy Osbourne the bricklayer’s mate, then I’d have still been doing all the ‘offstage story’ stuff. It’s just that no-one would give a fuck because I’d be a bricklayer’s mate. Every Friday or Saturday night there’s someone pulling some crazy, alcohol-fuelled stunt, but no-one ever hears about it because they’re just regular Joes.”

“When you’re in prison it stays in your fucking memory. A fucking hour in one of them places is long enough. But I didn’t do that long in prison; just about a month. It fucking worked because I didn’t want to go back there again.”

“Don’t tell anyone, but I can’t park. And I don’t know any of the road signs. When I passed my driving test, I wanted to get an Aston Martin. But eventually I settled on an Audi R8. It was five seconds of flash. I was driving along in it with Sharon and suddenly I had this moment of clarity. I thought: “Fucking hell, I’m 61. What do I need a sports car for?” So I got a Range Rover.”

“Since I had the quad bike accident [in 2003] my short-term memory is shot to pieces. I go upstairs to fetch something and by the time I get there I’ve forgotten why I did it. Now I understand why people live in bungalows.”

“I’m always looking for the rainbow I can’t find. Instead of just being me, I’ve got one of these alcoholic brains that thinks of the dark side of life. I can’t go: “I’ve made a lot of people happy.” I always think of the few people I haven’t made happy. Like Sharon will say to me: “What the fuck’s wrong with you?” We’d go to a function or something and there’d be some guy in the corner that I don’t know and he’s got a look on his face, and I think: “He hates me.” I’ll spend the evening trying to get the guy to like me. And Sharon will go to me: “What the fuck’s wrong with you?” And I’ll go: “That guy, he doesn’t like me.” And she’ll go: “But the rest of them love you.” But that’s the way I am. It’s like when I go and do a show. If I’m on stage and I can see one guy standing there looking bored, I’ll do the show for him.”

“I’m never 100 per cent at peace, but on a scale of one to 10, I’m about an eight-and-a-half now. I don’t see many people walking around with halos. I’m human, you know? I’m Ozzy. I’m me. I can honestly say that if I drop dead now, I would die a happy man. I’m learning to live life on life’s terms. I’ve only got today. I’ll sit here and go, fucking hell, next Christmas I’ll be doing this … But when I’m worrying about tomorrow, I ain’t living today.