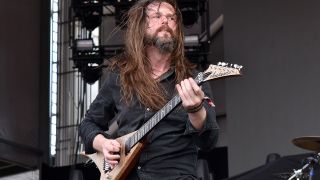 The widow of All That Remains guitarist Oli Herbert says she didn’t sign off on the release of one of her late husband’s last recordings.

A Dead Desire’s Moroni Silva released a video of a cover of Eurythmics’ Here Comes The Rain Again featuring the guitarist last week as a tribute to him – but Elizabeth, who is the late musician’s executor and sole benefactor – has called out its release.

She says on Facebook: “Hello everyone. This is Beth. I am aware that something was released that contained my husband’s work on it that was not finished before his death.

“To be clear, if anything is to be released after Oli’s death and it isn’t All That Remains material, you need me, the executrix of the estate, to sign off on it.

“Also, probate was not opened until this year so any arrangements after my husband‘s death for his material but before I was named executrix is unenforceable.”

Speaking with Metal Sucks about the recording yesterday, Silva said: “Oli was a good friend and wanted to release the song at the start of the rain season, so it was released on the New Moon of the 5th of this month and dedicated to him.

“I loved the way he did the guitar and when we added the cello and vocals, he couldn’t wait to release it.”

Oli died in October last year, with drowning named as the cause of death. In November, police sources told the Hartford Courant that they were treating his death as suspicious and were attempting to piece together a timeline of his final 24 hours.

All That Remains vowed to carry on after Oli’s death, saying it's what he would have wanted. Last week, they released their new single Everything’s Wrong with new guitarist Jason Richardson.