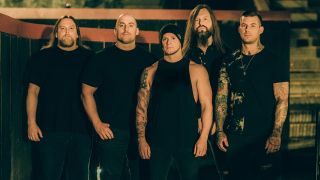 All That Remains say they plan to carry on without Oli Herbert.

The guitarist died last month throwing the future of the Massachusetts outfit into doubt. But in an interview with Revolver, frontman Phil Labonte reports that calling it a day is the furthest thing from their minds as Oli “would've wanted us to keep going”

Labonte says: “We’re going to go out and do as much as we can to get in front of as many people as possible and play these songs for Oli because that's what he would've wanted us to do.

“Oli was totally into the band and so pro doing whatever we needed to do to make it happen, make the show happen, make whatever happen. He didn't care.

Herbert’s body was found in a pond close to his home last month, with initial reports suggesting his death was an accident.

However, last week, local police said his death was being treated as “suspicious” and they were looking to speak to people who had been in contact with him on or before October 16.

All That Remains are asking fans to submit their guitar covers to honour Herbert’s legacy. Find out more.