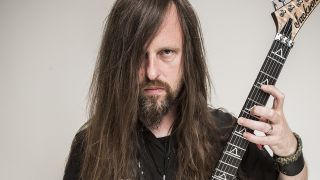 All That Remains guitarist Oli Herbert signed a will one week before his death, according to reports.

The 44-year-old’s body was found in a pond near his home in October last year, with initial reports saying his death was an accident.

His widow Elizabeth stated in a now deleted post on Facebook that he died from drowning, while he was also found to have unprescribed anti-depressants in his system at the time of his death.

However, in November last year, police sources told the Hartford Courant that they were treating Herbert’s death as suspicious, with local authorities attempting to piece together a timeline of the guitarist’s final 24 hours and were “reviewing his medical history and searching for people who may have been in contact with him on or before October 16.”

The newspaper now reports (via Alt Press) that Herbert signed a will a week before his death at a local car dealership, which was overseen by Elizabeth and a friend who works there. No lawyer’s signature is on the will, which is said to list Herbert’s widow as his executor and sole benefactor.

It’s also reported that the will excludes the guitarist’s sister Cynthia from receiving anything from his estate. Elizabeth has been named as the only recipient of the “property as well as any current or future earnings” from Herbert's work.

It’s also revealed that the couple’s house had recently gone into foreclosure after the guitarist didn’t turn up in court to contest the notice.

In November, All That Remains vowed to carry on, with frontman Phil Labonte saying: “We’re going to go out and do as much as we can to get in front of as many people as possible and play these songs for Oli because that's what he would've wanted us to do.

“Oli was totally into the band and so pro doing whatever we needed to do to make it happen, make the show happen, make whatever happen. He didn't care.