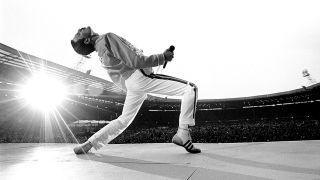 An official book charting Queen’s live performances is to be released later this year.

Queen: The Neal Preston Photographs will be published by Reel Art Press in October and will feature more than 300 images by the acclaimed photographer, along with text from guitarist Brian May and drummer Roger Taylor.

Preston began working with Queen in the mid-70s as the band’s official tour photographer and was with the group for many of their most famous shows, including Live Aid in 1985 and Queen’s last tour with Freddie Mercury in 1986.

A statement on Queen: The Neal Preston Photographs reads: “It is the first time Preston and Queen have collated this work in one volume: glimpses of life backstage, live performances, post-performance highs and lows, and outtakes – many of which have never been seen before – are accompanied by memories and anecdotes from Queen guitarist Brian May and drummer Roger Taylor. The pages vibrate with a palpable energy.”

Queen: The Neal Preston Photographs is now available to pre-order through the Reel Art Press website.

Earlier this week, May reported that after he was admitted to hospital following a gardening accident he had a “small heart attack.”

He added: “I say small, it's not something that did me any harm. It was about 40 minutes of pain in the chest and tightness. It's that feeling in the arms and sweating.”

May later thanked fans for their messages of support.