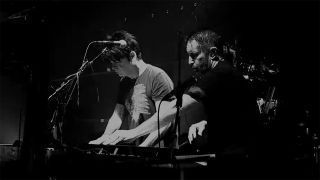 It was recorded at The Joint at the Hard Rock Hotel and Casino in Las Vegas last month – and Numan himself took to the stage to provide the lead vocals on the song that originally appeared on his 1979 album The Pleasure Principle.

Numan also appeared with NIN last weekend in Montreux to perform on the track, with Numan posting a selection of pictures from the show, saying: “Thanks to Trent Reznor and the entire Nine Inch Nails team for making us so welcome.”

Nine Inch Nails recently released their new album Bad Witch and will head out on the road with The Jesus And Mary Chain on the Cold And Black And Infinite US tour later this year.

Numan, meanwhile, is currently on the road across the UK and will return to North America for further live shows later this year in support of his 2017 album Savage (Songs from a Broken World).