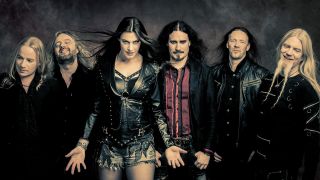 Nightwish leader Tuomas Holopainen says that he’s written “80 or 90%” of the material for the next Nightwish album.

He’s been working on material for the follow-up to 2015’s Endless Forms Most Beautiful, and during a Q&A session at the Kitee International Music and Art Festival, he revealed further details on what fans can expect on what will be their ninth album.

Holopainen says: “The next album is well on its way. I've written about 80 or 90% of the material so far. All the floodgates opened last October when we finished with the AURI project. I was listening to the album and just something clicked in my head. I’ve been really excited about writing songs ever since.

“It’s going to be 10 or 11 songs most likely. We're going to start recording next July, so if everything goes as planned, we're looking at a spring 2020 release."

Nightwish will head out on tour from next month on the next leg of their Decades tour to celebrate their 20th anniversary – and Holopainen says: “I think we’re going to record one of the shows and maybe do a live DVD, because these songs that we’re doing on this tour are never going to played again, so it’s a good idea to immortalise them.”

Asked about the orchestral sound on their next album, Holopainen says that he thinks they’ll use the instrumentation in a “different way than before” and adds: “I just feel that we took it to the maximum with the previous album.

“But it's such an essential part of the band and the sound that we don't want to get rid of the orchestra ever. But you want to search for some new ways of using it so that it doesn't end up sounding the same as before. We have some good ideas for that."

The next leg of the Decades tour will get under way with a set at Wacken Open Air on August 3.