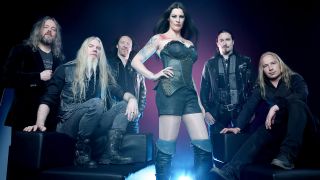 Nightwish have announced that they’ll release a new live package later this year.

Decades: Live In Buenos Aires was filmed and recorded at the Argentinian city’s Estadio Malvinas on September 30, 2018, and it'll be released on 2CD Digipak, 3LP, Blu-ray Digibook and BluRay/2CD on December 6 through Nuclear Blast.

The video footage was captured using 19 cameras and features a selection of classic cuts from Nightwish’s back catalogue, including End Of All Hope, Ghost Love Score, Élan, Nemo, Wish I had An Angel, Sacrament Of Wilderness, Elvenpath, Devil And The Deep Dark Ocean and Dead Boy’s Poem.

Keyboardist Tuomas Holopainen says: “I didn’t just want to pick out the most successful Nightwish songs for this tour. Instead, I asked myself which songs I would play to somebody who had never heard of our band.

“At some point during the preparation process, I realised that I was smiling all the time. I remembered the curious, innocent boy writing all of these songs.”

Earlier this month, Nightwish vocalist Floor Jansen revealed that the band had been filming a video for a new track in Helsinki, Finland.

Nightwish: Decades: Live In Buenos Aires
Nightwish will release this new live package in December. Filmed on their Decades tour in Argentina in 2018, it features a host of classic tracks from the band's back catalogue.View Deal