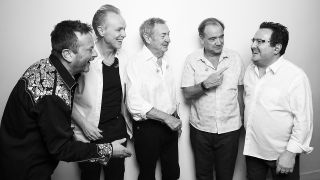 Nick Mason’s Saucerful Of Secrets have revealed they’ll release the album Live At The Roundhouse later this year.

The package will launch on 2LP, 2CD/DVD and Blu-ray on April 17 through Sony Records, with the concert recorded at the iconic London venue in May 2019.

To mark the news, footage of the band playing Meddle favourite Fearless has been released and can be watched below.

In addition, thanks to a collaboration between Trafalgar Releasing and Sony Music Entertainment, Nick Mason’s Saucerful Of Secrets Live At The Roundhouse will also be hitting cinemas around the world for one night only on March 10.

A statement reads: “This theatrical event will also include a pre-recorded cinema exclusive Q&A with Nick Mason and the band where they will answer questions submitted by fans.”

Tickets are on sale from the film’s official website.

Live At The Roundhouse is now available to pre-order in a variety of bundles, including packs with a signed poster.

Former Pink Floyd drummer Mason is joined in the lineup by Gary Kemp, Guy Pratt, Lee Harris and Dom Beken, with the band hitting the road across the UK and Europe later this year.